Students gathered on November 20th, 2016 to participate in a fun corn maze. This team building activity was a fun way to build community within the branch and to get to know other BSE peers. Thankfully everyone made it out! 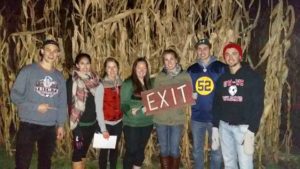 ASABE members finding their way out of the maze.

Students gathered together at a UW-Madison facility to participating in some ice skating with other members in the club on February 18th, 2017. Ice skating provided a stress free atmosphere for students to meet without the stress of school. The only stress was trying not to fall! New students had the opportunity to talk to older students and get general advice on school and college life. 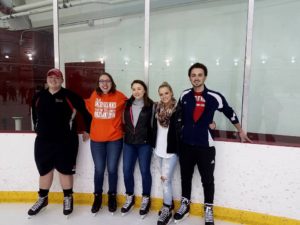 In conjunction with the BSE Department, ASABE sponsored a trip to Miller Park for a spring baseball game. As a club, we were able to tailgate a little before the game. We had a few footballs, a game of corn hole, and a grill for hotdogs.  Everyone had ample amounts of chips, cookies, and soda. The weather was perfect for tailgating and making new friendships.

We had seats high up above the first baseline and could see the entire stadium cheer with excitement after every hit. Although we didn’t get to see the roof open up, I can safely say that we all had a great time! The Brewers lost 3-6 against the St. Louis Cardinals. 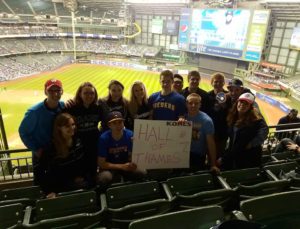 Students enjoying themselves at the Brewers game.